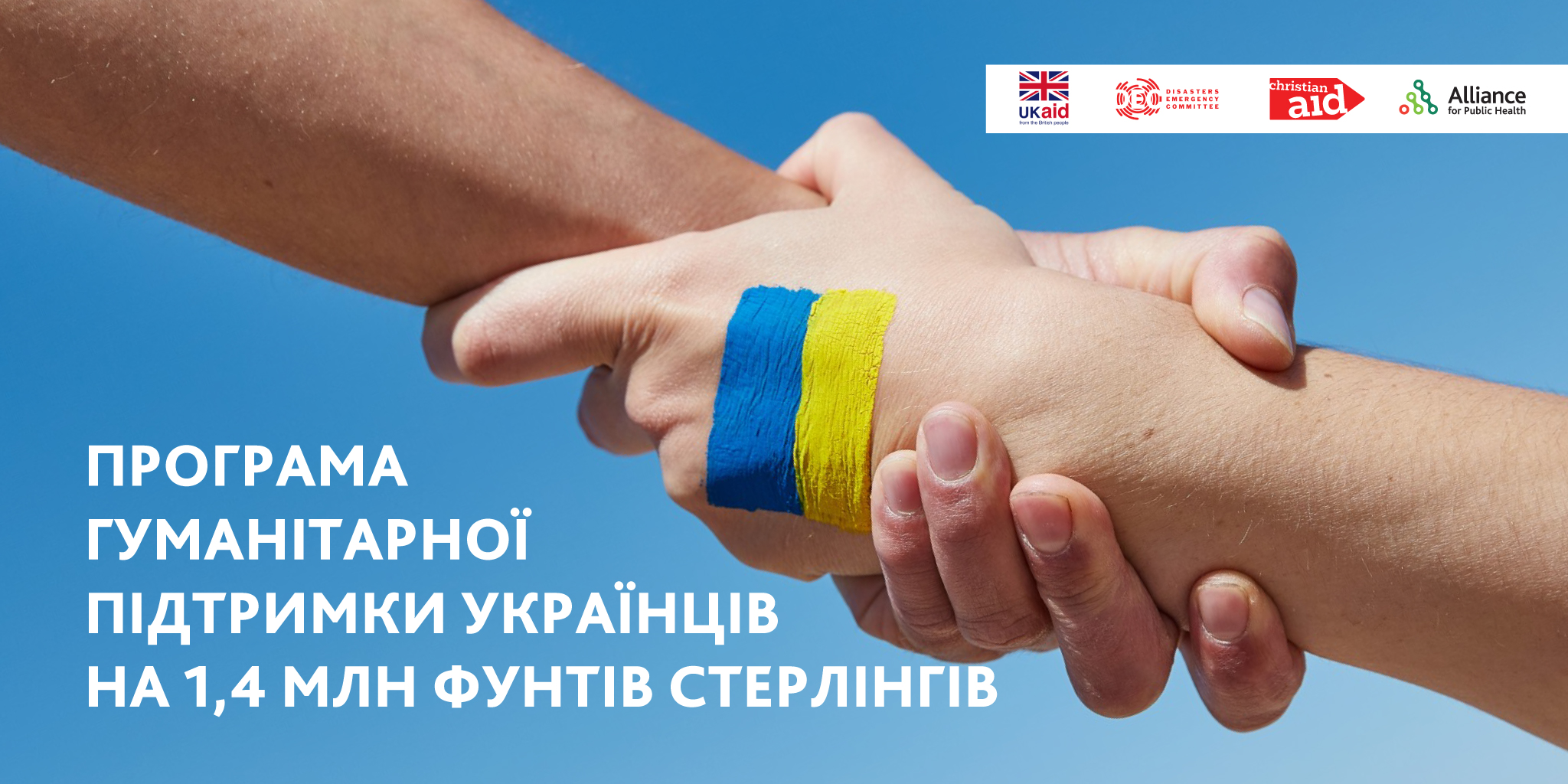 The Alliance has attracted a new humanitarian support program worth 1.4 million pounds to Ukraine

In response to the humanitarian crisis caused by russia’s military aggression in Ukraine, the Public Health Alliance, with the financial support of Cristian AID and the Disasters Emergency Committee (DEC), launched a comprehensive program of humanitarian support in Ukraine during the war and post-war reconstruction of Ukraine.

So far, the project’s first stage, which lasted 3 months from June to August, has already been successfully implemented, resulting in more than 70,000 Ukrainians receiving real assistance. The total budget of the humanitarian investment amounts to 1.4 million pounds.

Andriy Klepikov, executive director of the Alliance for Public Health: “In the conditions of large-scale russian military aggression, millions of Ukrainians, who were living in difficult circumstances before, found themselves on the verge of survival. A humanitarian program supported by Christian Aid directs aid to those who need it most. For those who at the moment do not receive it from the state or international organizations. In the first months of its activity, the Alliance has already supported over 75 humanitarian projects to help communities and initiative groups across the country. This is a significant investment to support and restore Ukraine, and we are grateful to our partners for their trust and support.”

It is worth noting that the program’s approach to solving the crisis situation is distinguished by the support of community initiatives that independently find ways to improve life in war conditions. “This is a focused support of people’s natural ability to overcome difficulties and help each other in crisis situations, and this stimulates people’s faith in their own strength, encourages, and deepens the self-esteem in the community. Communities are rebuilding new lives independently, focusing on what matters most. Our task is only to listen to the needs and provide comprehensive support.”

“It is difficult for me to recall how our family survived the war,” said Ms. Olha, a mother of several children from the village of Stary Bilous, which was occupied by the russians in March, about her experience of receiving help from the “Nation Revival” organization. “I can only say that we didn’t move anywhere. It didn’t work out because the middle child had an appendicitis attack in the first days of the war, and he had to be taken to the hospital. He spent 10 days there, and then the bridges were already blown up, and there was no way to leave. It was challenging and scary for the small children. They saw how their neighbors’ house was on fire and spent the night in the basement, which was not suitable for this (it was freezing). However, I don’t want to mention all this again. Thank you very much for your understanding, help, and support. My children and I started the necessary treatment.”

And further on – even more support for Ukrainians. The program’s primary focus is helping internally displaced people and people who suffered from military aggression in Ukraine.

Maryna Varban, head of the Humanitarian Support Program of the Alliance for Public Health:

“We see the terrible humanitarian consequences of russia’s military aggression not only on TV as the whole world does. We live in these conditions and understand the extreme need for emergency intervention and provision of operational assistance to Ukrainians affected by the war. This support is essential for Ukraine. We will use all our experience working with HIV/TB programs so that everyone who needs help receives it as soon as possible. We focus on supporting the work of shelters, evacuation from war zones, direct humanitarian and social assistance, psychological and legal support.”

Shelter at the Mayak children’s camp in Poltava, with the support of the Public Health Foundation.

In Poltava, the camp director, at her peril and risk, accommodated people who arrived from Donetsk, Luhansk, and Kherson on the area of the children’s recreation camp. 70 people were housed, and 51 remained for permanent residence. These people do not have the opportunity to return home and do not plan to move further, so they put up with the realities as they can: they have started a little farm with vegetables and chickens and are preparing preserved food for the winter. They all live in one space, divided into two zones.

Of course, people did not have enough basic things to arrange their lives: they washed items and bedding by hand, use the only one refrigerator for everyone, there was a limited number of plates, and limited access to cooking appliances.

The application of the initiative group was supported, and a refrigerator, washing machine, induction stove, electric oven, and sets of pots and pans were purchased for the shelter.

“When they brought the equipment, it was like a small holiday! The women, like little children, circled the plates and appliances. After getting permission to connect the refrigerator and washing machine with the electricity, our husbands did not have to ask too long. They quickly installed everything! Yesterday was the first day of washing!!! We made a schedule, and everyone is happy!!!”

Since 2015, people who were forced to leave their homes in various regions of the temporarily occupied areas of Ukraine (Donetsk, Luhansk, Kherson, and Zaporizhia regions) have been living in the modular town. In 2022, the town’s population grew several times, accepting new families who did not want to go further. Solving fundamental household problems of living is, of course, an urgent component of improving the quality of life.

Installation of stationary dryers on the territory of the Modular town situated on Steshenko st., 18 will help improve the level of life, the participation of residents in the project’s development, and its implementation will help integrate and unite those who have already lived in the town since 2015 with those who have just settled in it.

Lyudmyla, volunteer coordinator of the town:” We learn “on the go”, we ask a lot of questions because none of the members of our group has experience in this kind of work. We were not ready for war, nor were millions of our compatriots. But today, we continue to expand the range of targeted assistance to internally displaced persons based on our modular town. However, sometimes, some such problems and issues cannot be solved together with the state – either there are no laws, or there are no instructions, or it is not on time. And here, volunteers or organizations like BO BF “Hope” come to the rescue and help us find a solution. And this time, they helped us with the development of the project, financing, and implementation of the installation of dryers on the territory of the town.”

About the Public Health Alliance

It should be noted that the Public Health Alliance team has more than 20 years of experience in implementing access programs and supporting treatment sustainability in HIV/TB programs. Today, our experienced specialists are working to assist those who need it most.

In particular, several initiatives and programs have been launched since the beginning of the war. The Humanitarian Convoy began its work, transporting more than 500 tons of cargo. A “special” long-distance flight was implemented for the transportation of 1.2 million tablets for the RRT programs, purchased by the Ministry of Health of Ukraine and the Public Health Alliance, which will be delivered to 19 medical institutions in 6 regions of Ukraine for patients who were on the verge of interruption of treatment due to the war. The international HelpNow HUB emergency support program has been launched for Ukrainians who were forced to go abroad. More than 9,000 Ukrainians from 31 countries received assistance. Programs for prevention and access to treatment for HIV, tuberculosis, hepatitis, and ART have been adapted, and psychological support programs, etc., have been expanded. More information on wartime work in Situation Reports >>>

Additional information about the Humanitarian Program is available here >>>