Statement on the World AIDS Day: Hands Up for HIV Prevention! 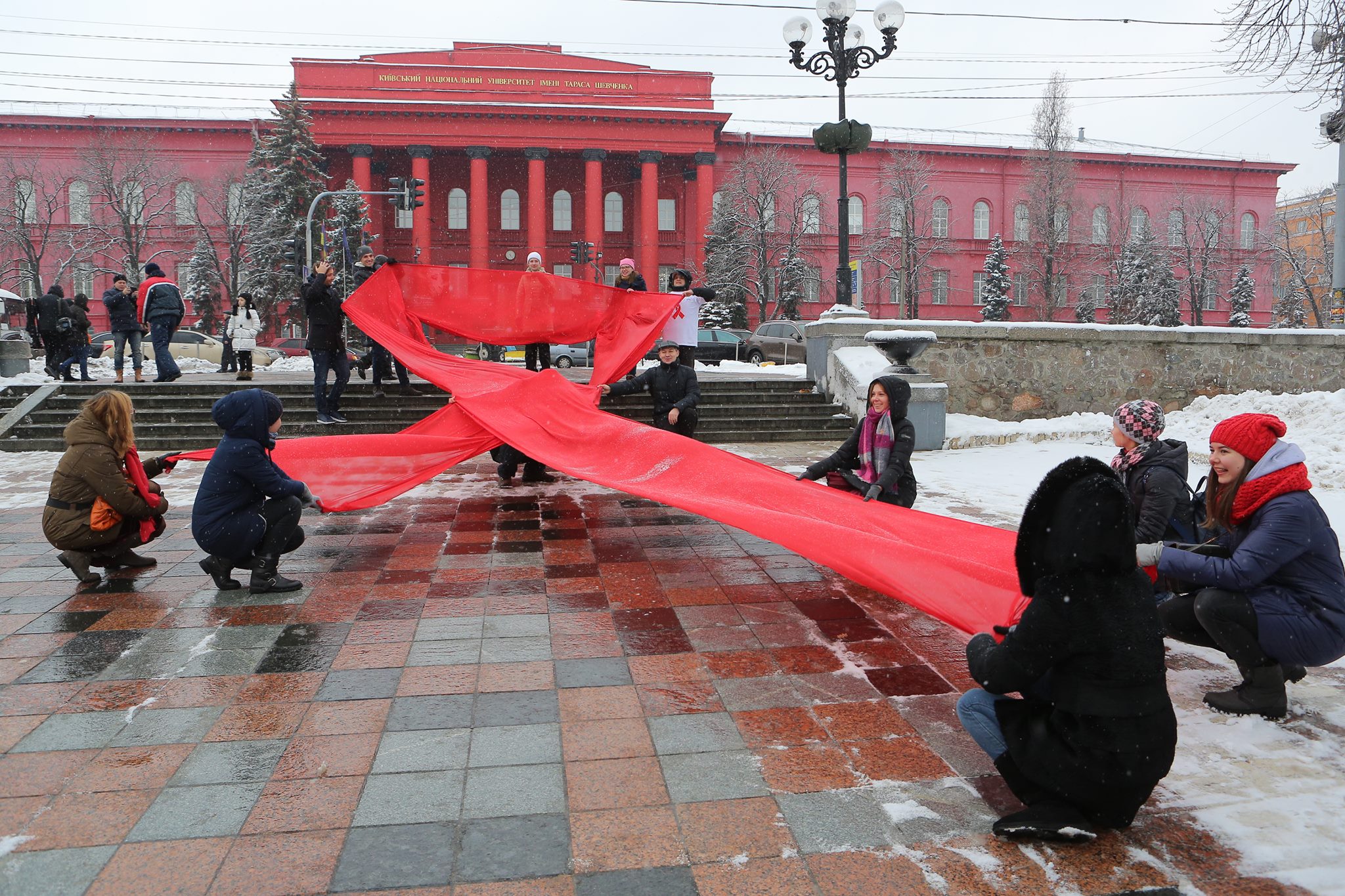 Ukraine is still suffering from the HIV/AIDS epidemic, though lately we have seen a trend towards its stabilization, with forecasted reduction in the number of new HIV cases. The recent trend is a decreasing share of the parenteral HIV transmission (mostly though sharing injection equipment) which used to be prevailing – according to the official statistics, in 10 months 2016 it was only 21% – and a growing share of the heterosexual route of transmission. As of October 2016, 132,714 people living with HIV were officially registered with healthcare institutions in Ukraine, though it is estimated that their real number exceeds 217,500 people (almost 0.5% of the total population). The increased share of HIV transmission through unprotected sex defines new challenges in the activities of those organizations, which work in HIV prevention. Based on the modelling data, almost 80% of sexual transmission cases are related to sexual contacts with the members of vulnerable populations, which is why there is an urgent need to elaborate new, innovative approaches to prevention – and that’s what we focus on.

Alliance shares the priorities of UNAIDS, which on the eve of the World AIDS Day underlined the key role of prevention, – in his statement, the Executive Director of UNAIDS, Michel Sidibé, pointed out that “prevention should be central to our effort in the future”. UNAIDS campaign Hands Up for HIV Prevention is based, in particular, on the great work done by our country.

We continue working with the populations vulnerable to HIV – in 2016 in cooperation with partner NGO about 300 thousand clients were covered with our programs (69% of the estimated number of people who inject drugs, 43% of sex workers and 27% of men who have sex with men, representatives of other vulnerable groups including adolescents with risky behavior). We distributed almost 11 million condoms, 21 million needles and syringes and offered over 1 million consultations with social workers.

Over the recent 10 years, prevention projects allowed providing 1.3 million rapid HIV tests, with 55,630 positive results detected. The biggest number of positive results was found in Dnipropetrovsk, Donetsk, Odesa regions and Kyiv. As of today, the rate of HIV case finding among new clients who have not received prevention services before, is 16 times (!) higher than among the regular clients of prevention projects, which demonstrates effectiveness of the years-long operation of Alliance-supported projects.

In 2016, Alliance continued implementing the approach of assisted self-testing for HIV, which allowed extending the range and increasing the number of clients covered. As compared to 2014, the number of tests performed grew by 250%, which has already allowed detecting over 3.2 thousand clients with positive results and referring them to healthcare institutions.

Alliance continued its efforts to scale up access to opioid substitution treatment (OST): in October 2016, a new benchmark of 9 thousand patients was achieved. This is the biggest OST program in the countries of Eastern Europe and Central Asia, within which 9,073 drug-dependent people received OST (as of 1 November 2016), with each fifth patient receiving OST drugs based on an alternative model, with such drugs handed out for several days for self-administration by clients (based on prescriptions, from healthcare institutions, “home care”). This component was implemented in cooperation with Center of Public Health of Ministry of Health of Ukraine. Such alternative models contribute to sustainability of the OST program, its scale up and create more comfortable conditions for the program clients. Alliance developed effective models to deliver OST, which in 2017 will be provided to most patients within budget financing.

Comprehensive approach to HIV prevention and care stipulates detection and treatment of concurrent infections, including tuberculosis (TB) and viral hepatitis. In 2016, Alliance greatly intensified its efforts in those areas: over 138 thousand members of vulnerable populations were screened for TB; about 14 thousand people were referred to clinical and laboratory TB diagnostics. Out of 435 clients of prevention projects, who were diagnosed with TB, 92% started treatment. 2016 was marked with acceleration of the first in Ukraine hepatitis C treatment program with direct-acting antivirals (sofosbuvir), allowing more than 1,200 patients – members of vulnerable populations – to get access to HCV treatment with innovative regimens. Based on the diagnostic tests performed 12 weeks after the completion of treatment, hepatitis C virus was undetectable in 94% of patients – which is the best outcome in all the history of viral hepatitis treatment in Ukraine!

We are proud that during all the years of our activities we consistently support and involve communities into program development and bidding processes (to procure OST drugs and consumables for harm reduction projects) as well as into research activities, program monitoring and evaluation, in particular – on the temporarily uncontrolled areas. Thus, members of vulnerable communities are not only beneficiaries of our innovative and efficient services, but also equal partners and meaningful participants of their development and implementation.

Prevention and treatment are equally important to stop the HIV epidemic in Ukraine and ensure fast tracking to 90-90-90 targets. However, it should be noted that major part of government funding is aimed at the procurement of medical drugs. Thus, curbing the growth of the new HIV cases is possible mainly thanks to the international donors and civil society organizations. Innovativeness and effectiveness of such programs are recognized at the international level. Ukraine is currently among the world leaders – those several countries, which were able to overcome the artificial barriers in HIV testing, initiating self-testing programs based on recently published WHO guidelines. Now HIV testing will be more accessible for millions of Ukrainians.

We welcome the steps done by the Government of Ukraine to increase financing of the response to AIDS, TB and hepatitis, in particular to significantly scale up treatment. Nevertheless, financing of prevention programs from state and local budgets is still disproportionately low, so those programs still depend on support of the international donors.

We hope that in 2017, prevention will be a priority of the national healthcare policy, and the state will start to make targeted investments to reduce the number of new HIV infections.

Together we will be even more effective!