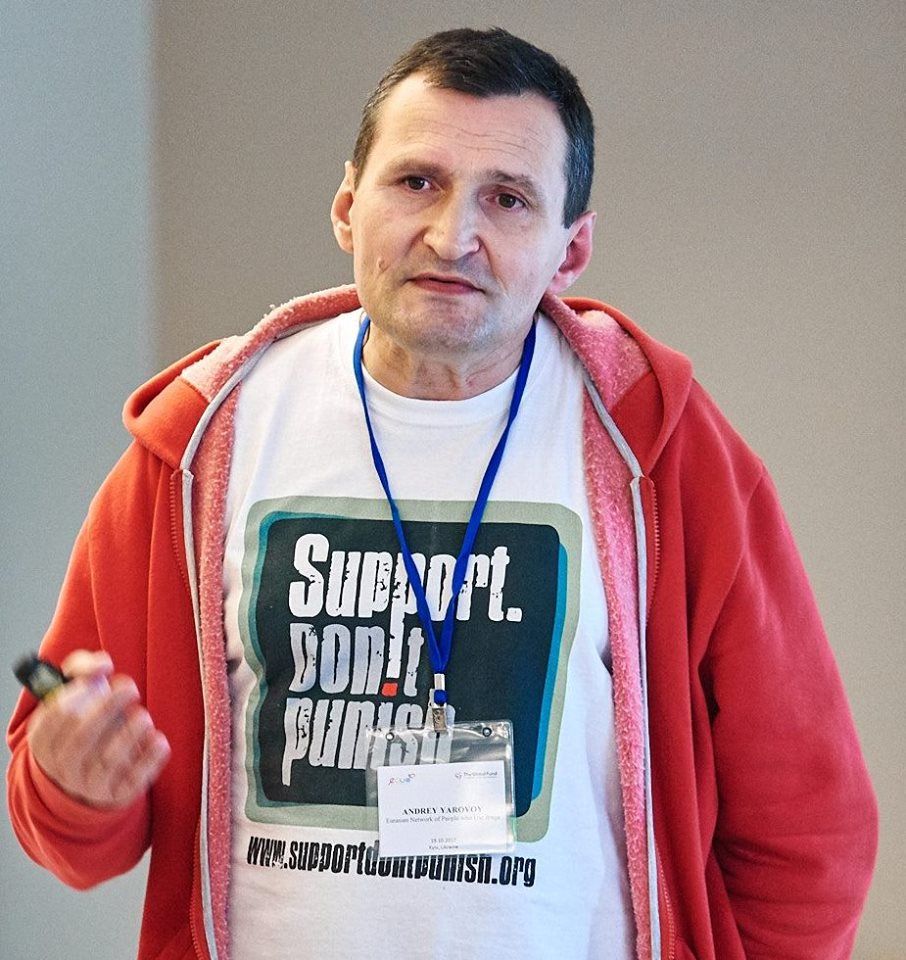 Andrii Mykhaylovych Yarovyi, DOB. 06.11.1967, a citizen of Ukraine from the city of Kyiv, since 2009 has been a substitution maintenance/opioid substitution therapy (buprenorphine) patient. He is a member of Eurasian network of people who use drugs (ENPUD), All-Ukrainian Association of People who use drugs (PUD. Ukraine/VOLNA), a human rights champion and a consultant on quality monitoring at ICF “Alliance for Public Health” working on HIV/AIDS prevention programs that since 2004 have been supported by the Global Fund to Fight AIDS, TB and Malaria.
On 25.08.2018, Andrii Yarovyi once again left from Kyiv to the temporarily uncontrolled territory of Luhansk oblast (Eastern Ukraine) as a consultant of the Alliance for Public Health to study the access of most-at-risk populations and HIV-positive people to prevention services and vital treatment.

In 2015-2018, Andrii for this purpose had on numerous occasions visited the uncontrolled territories of Donetsk and Luhansk oblasts where, at that time, programs supported by the Global Fund to Fight AIDS, TB and Malaria.
It was Andrii who, during such a visit in 2015, made unique video-interviews of the last days of the opioid substitution therapy (OST) programme on the temporarily uncontrolled territories in the Eastern Ukraine that formed the basis of the documentary “Live or Die in Donbass?!” In 2014-2016, more than a thousand of OST patients lost access to the vitally important  treatment on this territory.

On 26 August 2018, when Andrii was crossing an unauthorized checkpoint in Krasnodon rayon (temporarily uncontrolled territory of Luhansk oblast), he was illegally detained by members of “Luhansk People’s Republic” ( “LNR”), who seized from him 38 pills of «Buprenorphine hydrochloride», a narcotic medication used for OST, with the total weight of 0.152 mg. The day before, Andrii legally obtained a 10-day stock of this drug (a total of 0.16 g) at a healthcare facility in Kyiv for unsupervised administration. The next day, on 27.08.2018, Andrii was brought to the “Ministry of State Security of LNR” and illegally arrested over “large-scale drug-trafficking”, as was stated in the charge Andrii faced several months later. Only in mid-October 2018, Andrii was accessed by a local lawyer hired through the Alliance for Public Health .

In late October 2018, an investigator of “MSS of LNR” charged Andrii with a «violation» of p. 3 of article 282 of the «Criminal Code of “LNR” (large-scale drug/buprenorphine smuggling), and so-called “court of LNR” selected a pre-trial restriction in the form of arrest the term of which was then extended several times; all this time, Andrii was illegally held in inhuman conditions at an underground facility of the “Ministry of State Security of LNR” (at Sovetskya str. 79 in Luhansk).

Based on Andrii’s mother’s claimt on the illegal arrest of her son on the temporarily uncontrolled territory of Luhansk oblast, Svyatoshyn Unit of the National Police  n Kyiv City on 22.10.2018 opened a criminal case under article 146 of the Criminal Code of Ukraine (Unified Register of Pre-Trial Investigations no. 12018100080008478). Simultaneously, to organize further exchange, the woman submitted a request and other documents to the Security Service of Ukraine’s United Center for Coordination and Search and Release of Illegally Incarcerated People, Hostages, and Locating Persons who Went Missing in the Area of Anti-Terrorist Operation.

The situation with Andrii’s illegal detainment with the OST drug was included in the Report on the human rights situation in Ukraine of the Office of the United Nations High Commissioner of 16 August to 15 November 2018 (para.52, page 12).

On February 7, 2019, Andrii was transferred for further illegal detainment to the pre-trial Detention center  (SIZO) “Luhansk Penitentiary Facility of the Ministry of Interior of LNR” (23rd Line street, 4; Luhansk).

On February 11, based on the appeal of Andrii’s mother, the European Court of Human Rights (ECHR) opened proceedings according to Rule 39 of the Rules of Court of ECHR (interim measures). Considering the importance and urgency of the case, the Court decided to consider it as a priority case under Rule 41 of the Rules of Court and ensure confidentiality of certain information to avoid harm to the complainant (Rule 33.1). ECHR has submitted a corresponding official communication to the responsible public authorities in the Russian Federation and in Ukraine.

On 22 February 2019, so-called “Krasnodon Rayon Court of LNR” illegally sentenced Andrii to a long-term imprisonment and confiscation of property for the «alleged smuggling of drugs» — his OST medications (part 3 of article 282 and part 2 of article 276 of the “Criminal Code of LNR”).

In April 2019, Andriy was transferred from the detention center to Sverdlovsk prison, currently he is located at (94420, Lininskoe village, Sverdlovskiy rayon, 16 Profsojuznaya Str ); the support of APH has ensured he regularly receives food and living essentials; he enjoys limited access to his lawyer; also, he has recently been allowed to see his family once a month.

As far as we know, Andrii has been included in the exchange list, but nothing is known about specific dates. Previously planned exchange events have already been postponed several times.

We would appreciate dissemination of this information among media, international, humanitarian, public or other organizations that may somehow prove helpful in liberation of Andrii Yarovyi and returning him back home.

On April 28, 2019 during the opening ceremony  of the 26th Harm Reduction International Conference  Porto ( Portugal) Andrii Yarovyi  was awarded with the Carol and Travis Jenkins Award as a victim of a deliberate violation of human rights involving illegal imprisonment for storing legally obtained OST drugs. This award has been presented each year since 2005 to a person who either used to, or currently uses drugs, and who has made an outstanding contribution to reducing drug-related harm. Information about Andrii Yarovyi, who was illegally detained and convicted on the temporary uncontrolled territory of Ukraine