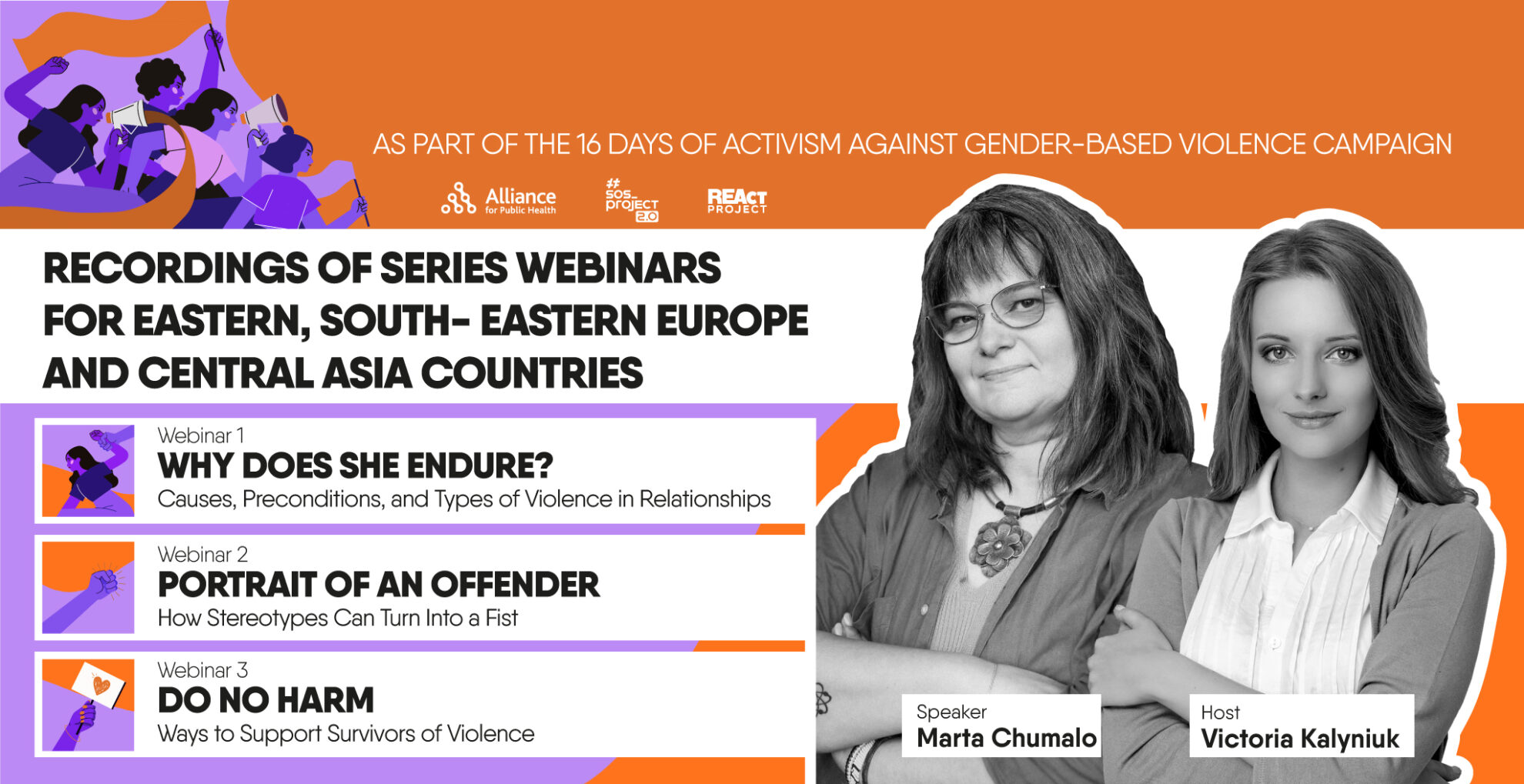 As part of the international campaign “16 Days of Activism Against Gender-Based Violence”, the #REAct team held a series of webinars to support, protect and prevent violence against women and girls, especially from vulnerable groups.
At the webinars, among other materials, the participants were presented with the “Wheel of Violence” model, which reveals the reasons why women often return to the abuser, what strategies of psychological violence are most often used before the use of physical violence and what lies at the root of violence. The psychological portrait of the abuser was considered and it was discussed why gender stereotypes can become the basis for violence in the future. This information is a very valuable tool in the effort to end violence against women and girls from Eastern Europe and Central Asia.
“An interesting fact is that 20% of the participants were men. It was men who actively participated in the discussion in the webinar chat, and are now actively testing to get a certificate. I am pleased that men want to learn more about the causes and preconditions of gender-based violence – said Victoria Kalyniuk, REAct regional coordinator.
Almost 500 participants from 16 countries joined the webinars: Albania, Belarus, Bosnia and Herzegovina, Belgium, Armenia, Georgia, Kyrgyzstan, Moldova, Montenegro, Tajikistan, Serbia, North Macedonia, Poland, France, Uzbekistan, Ukraine and Georgia.
Victoria Kalyniuk noted that understanding the value of this information, easy and understandable format of its presentation is very important to ensure coverage of the maximum number of countries in the region: “We provided translation into 5 languages, the speakers spoke in Ukrainian and the translation was in English, Albanian, Bosnian, Georgian and Russian. And as a result, we saw the active involvement of participants from the countries of the region in the training. The webinar recordings are also available in all five languages.”
Trainer Marta Chumalo shared the key tools for effective assistance to the victim and stabilization of her condition.
Marta Chumalo uses research and scientific basis in her work, she gives social workers and those who work with victims of domestic violence a toolkit to explain to victims in simple words what violence is, why it happens and why, unfortunately, it is repeated.
“I was lucky to get to the offline training of Ms. Marta in Lviv and then I realized that her lectures should be heard by everyone. I really liked the format of teaching: not theory, but clear facts and research that really open the eyes to the preconditions that fuel violence against women and girls,” Victoria shared.
Since women are often afraid to report an act of violence that has happened to them or even blame themselves, one of the important goals of the webinar series was to give social workers clear theses and simple words that can be said to the client so that she understands that the violence that has happened to her is not a normal situation, it should not be so.
“We had an idea to help our social workers in the countries of the region, to learn how best to start this conversation, how to get the victim to open up and talk about her situation so that we could provide the necessary assistance. Through these webinars, we wanted to spread the idea that any gender-based violence is not normal, it is not “ok”,” Victoria added.
The webinars also presented a study by Dobash&Dobash, which explains that it is the deep stereotypical beliefs of perpetrators about the role of women in society and their functions in a couple that are the main cause of violence, not social. Material or psychological background of offenders. The study “The Jane Monckton-Smith Murder Graph” describes what may be the signals that indicate the danger of violence in relationships. After all, the most effective prevention of violence against women is intervention before the first blow is struck.
The most important issues from the webinars were put to the test in order to fix in the memory of the participants the main theses, simple formulations, which, we hope, they will continue to carry them to the masses and change gender stereotypes in the countries of Eastern Europe and Central Asia.
If you have not yet had time to attend the webinar, you have the opportunity to view the recordings until January 31, 2023. Everyone can listen to them and after passing a short test – get a personalized online certificate.
Learn more: https://react-aph.org/uk/zapys-seriyi-vebinariv-po-protydiyi-genderno-motyvyrovanomu-nasyllyu/