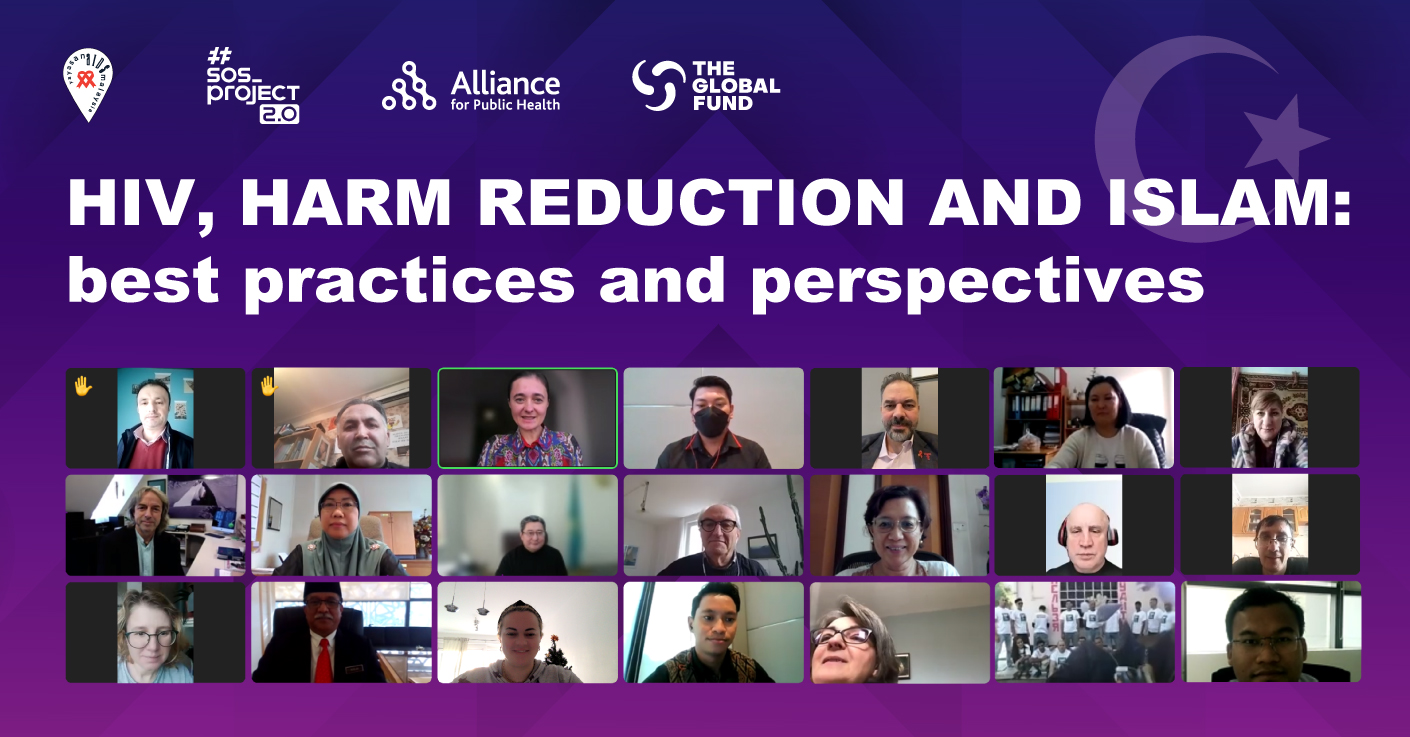 Alliance for Public Health and the Malaysian AIDS Foundation (MAF) have held an expert discussion ‘HIV, Harm Reduction and Islam’ to share the experience and present successful mechanisms for implementation of harm reduction and HIV prevention programs in Islamic countries.

Andriy Klepikov, Executive Director at Alliance for Public Health, said that a half of the 14 countries of SoS_project 2.0, the geographically largest Global Fund’s regional project, are Islamic. That is why it is important to study the best practices in HIV response and ensuring more sustainable response through support and coordination with Islamic religious groups and their leaders. This cooperation would be productive and help to significantly accelerate the progress of defeating the HIV/AIDS epidemic in such countries.

The best experience of stopping the spread of HIV

Islam can help to stop the spread of HIV and to provide essential services, including harm reduction ones. Tetiana Deshko, International Programs Director at Alliance for Public Health, said that Malaysia currently has been the most successful in this regard.

Professor Adeeba Kamarulzaman, a member of the Global Commission on Drug Policy, told about the experience of Malaysia: ‘When we did the advocacy for implementation of harm reduction services, this experience seemd controversial, yet we understood it was necessary. HIV spread among the people injecting drugs was on the rise, and we had too quickly respond and introduce syringe exchange programs and methadone therapy. We encountered resistance from authorities and religious organizations, but we explained and discussed the concept with all stakeholders. We launched a pilot project that proved that such programs are needed and that we can provide the necessary treatment to stop the spread of HIV among people using drugs in Malaysia.’

Using methadone at Ar-Rahman mosque was allowed by religious authorities as it is considered a medication that can be used to tread drug addiction.

‘In Malaysia, we enable the mosque community to develop joint thinking for further improvement of rehabilitation from addictions using innovative methods of the Islamic spiritual influence program,’  told Professor Rusdi Abd Rashid. ‘In particular, we implemented Spiritual Enhanced Drug Addiction Rehabilitation (SEDAR) program in 2010. The goal of the program is to help the government to expand harm reduction intervention in the context of drug use and HIV prevalence among people who inject drugs by involving mosques as a new platform in addition to existing institutions of the Ministry of Health, private clinics, prisons, and the National Drug Agency.’

Nizam Yussuf, treasurer at Ar-Rahman mosque, said that the mosque committee had agreed to adopt the program because it helped people to improve their lives.

Dr. Fazidah Yuswan from the Ministry of Health of Malaysia shared convincing national statistics. In particular, she noted that at the early stages of the epidemic back in 1990s, upt to 90% of all new HIV cases in the country took place among people who use drugs. At the national level, introduction of harm reduction programs began in 2005-2006, and the trend of prevalence of the epidemic started to decrease. By 2021, the number of new HIV cases among people who use drugs had dropped below 5%. And in 2000s, the epidemy was on the rise. According to estimates made in 2021, introduction of harm reduction had allowed to reduce HIV incidence by 70%. Dr. Yuswan is confident that the harm reduction program has proven its effectiveness in reducing the HIV incidence and opioid dependence. Dr. Yuswan also mentioned that the responsibility for implementation of the syringe exchange program was placed on the HIV Council under the Ministry of Health of Malaysia. It is the MoH that leads the methadone therapy efforts in the country. These programs were implemented thanks to the support from the religion department, National Drug Agency and the police.

Bamar Gueye representing the National Alliance of Religious and Medical Experts in Health and Development from Senegal told about the experience of his country in implementation of harm reduction programs. In different countries, the programs face similar discussions about how harm reduction programs can be implemented in Islamic states. The example of Senegal is a story of a persistent and open dialogue between various specialists aimed at preserving people’s lives. Now these programs successfully operate and expand.

Central Asian countries are making their first steps, but the religious community is not yet ready to accept the HIV response programs.

Kadyr Malikov of Independent Analytical Center ‘Religion, Rights, and Politics’ noted that countries of Central Asia are not yet prepared for either decriminalization or methadone-based substitution therapy because of stereotypes and community’s reluctance. Islamic rules make harm reduction programs difficult or sometimes almost impossible to implement, therefore comprehensive efforts are required as well as political will of local authorities. It takes meetings that have to be used to present international experience and convincing arguments.

Because of their stigma, people living with HIV often avoid seeking aid or disclosing their HIV-positive status and remain helpless. Religious leaders have a unique role to play as they can break the silence and speak up about the suffering of people with drug dependence and offer them a helping hand.

According to Pavel Bém, a member of the EECA Commission on Drug Policy, religious leaders are much closer to people. It is known that HIV is preventable, but the prevention requires leadership and commitment at all levels of the society. It is wrong to rely solely on public authorities and expect them to change the epidemic situation. He says that religious space is an important platform for introducing experience, evidence base, good practices and information communication with the most-at-risk populations, including families of the members of such populations. Religious space is exactly where an open dialogue is possible, where people can speak up about their problems, needs or fears. Developing this level of communications will significantly improve the situation in Islamic countries.

The expert discussion was conducted with the support of SoS_project 2.0, a regional project funded by the Global Fund and implemented by the Alliance for Public Health and a consortium of organizations.