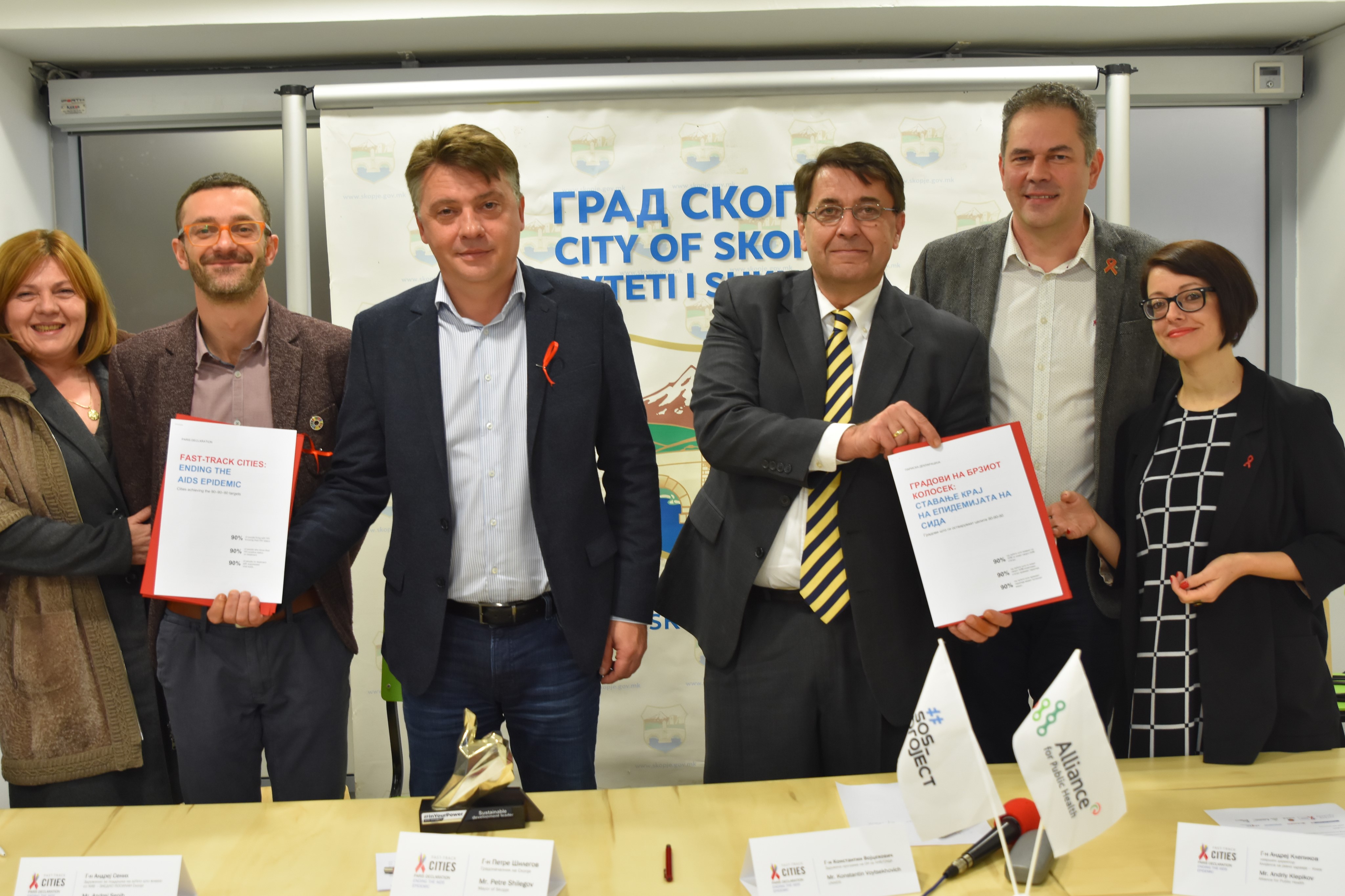 On January 9, 2020, the Mayor of Skopje, Petre Shilegov, and Konstantin Voytsekhovich, adviser of the UNAIDS Regional Office for Eastern Europe and Central Asia, signed the Paris Declaration to end AIDS in the capital of North Macedonia.

Thus, a new important milestone has been achieved for the #SoS_project team. Fourth city at Balkans has signed Paris Declaration, and that is one more step for the SEE region to sustainable HIV services provided.

The official signing ceremony was visited by Deputy Prime Minister of Northern Macedonia Mila Tsarovskaya, Minister of Health Venko Filipce and deputies of the Government of Northern Macedonia, as well as employees of the Ministry of Health, representatives of the city authorities of Skopje, the UNAIDS Regional Office for EECA, the Alliance for Public Health, nongovernmental organizations Stronger Together, HERA, Healthy Options Project Skopje, media, etc.

On the day of signing, Andriy Klepikov, Executive Director of the Alliance for Public Health, presented the mayor of the city, Petra Shilegov, with the first international award #InYourPower in 2020 for responsible leadership in the fight against HIV/AIDS. This award also symbolizes support from the #SoS_project team and international partners, which will be provided to the capital of Northern Macedonia at all stages of the Paris Declaration implementation. After all, by signing the PD, the mayor of Skopje not only made a commitment, but also joined the regional team of leaders who are improving the HIV / AIDS situation in their cities today. Mayors who take responsibility for the health of citizens and take specific steps to improve the situation in the city. In his speech, Petre Shilegov called on the mayors of other cities in the Balkan region to follow the Skopje’s example:

“We want to reaffirm our commitment to promoting collective health in the city of Skopje and around the world, and to contribute to reducing the incidence of newly diagnosed HIV cases. We are aware of the potential risks of HIV and AIDS, tuberculosis and viral hepatitis, and we are responsibly involved in national efforts to protect the health and well-being of the population. As one of the few Balkan cities to join the initiative, I urge the remaining cities, especially our neighbors, to join efforts to put an end to the virus in the next 10 years to provide healthier societies. That is why we are committed to creating and maintaining a healthy society because only in this way we can build a happy future not only for our fellow citizens, but also for all citizens in the country and beyond”.

Andriy Klepikov welcomed such an important strategic decision, thanked the city leadership for their openness to the introduction of innovative approaches in the fight against HIV and a great example for other cities, and not only at Balkans, but also in EECA: “We congratulate Mr. Petre Shilegov, Mayor of Skopje, on the Paris Declaration signing and the firm intention to end AIDS by mobilizing municipal resources. We welcome the great work of our partners from North Macedonia – Stronger Together, whose efforts led to political commitment and support for introduction of new approaches to HIV prevention/treatment. For example, we expect that KPs in Skopje will get access to PrEP and self-testing already in the first half of 2020. This is a very important strategic decision for the fourth city in the SEE region, which solidly strengthens the growing leadership of the Balkan region in the fight against AIDS. APH and #SoS_project team will continuously support the city at all stages of the Paris Declaration implementation “. “We welcome Skopje to the “Fast Track Cities” initiative and congratulate the City on taking this decisive step in complementing its response to HIV. We hope that other cities in North Macedonia will follow Skopje’s lead. Cities can play a vital role in tackling the HIV epidemic. They are positioned in a way that can make HIV services accessible by working with central government, the Ministry of Health, NGOs and communities – for example, by providing space for awareness-raising, counseling and HIV testing activities. This work will undoubtedly make Skopje and other Macedonian cities more inclusive, safe, friendly to all and contribute to raising the quality of life, social and economic development”, – said Konstantin Voytsekhovich, adviser to UNAIDS Regional Office in EECA at the official signing ceremony. “For people living with HIV in Skopje and North Macedonia this step of the city of Skopje sends a message of support and encouragement. For those who don’t know they are living with HIV it may be an incentive to take the test and then access treatment, knowing that the problem of HIV is not neglected anymore, but institutions and the city are taking measures to ensure accessible and quality services for prevention, treatment, care and support”. Ms. Eleonora P. Nikolovska also shared her confidence that international support and the political will of the mayor of Skopje gives reason to believe that the goals will be achieved and the lives of citizens will be saved.

“We are ambitious to become the first city in the Balkans to achieve 90-90-90. The Mayor’s signing of the Paris Declaration yesterday sets us on the fast-track to end AIDS”, said Eleonora P. Nikolovska, Head of Department of Social, Child and Health protection of the Skopje City, at a working meeting with #SoS_projectteam.

Let’s remind that 2019 was the year when strengthening the responsible leadership of cities started in the region of Southeast Europe. The mayors of three cities at once – Podgorica, Bar and Bielo Pole, simultaneously signed the Paris Declaration on December 2, 2019, thus, Montenegro became the first country in the world where three cities at the political level declared their intention to defeat AIDS and achieve development goals 90-90- 90.

The Paris Declaration assumes that the city commits itself to do everything in order to achieve the 90-90-90 goals by 2030. This means that 90% of all PLHA should know their HIV status, 90% of those infected should be on treatment, and 90% of them should have undetectable viral load (the virus must be completely suppressed). According to the World Health Organization, by 2030 the world will be able to stop the HIV epidemic.