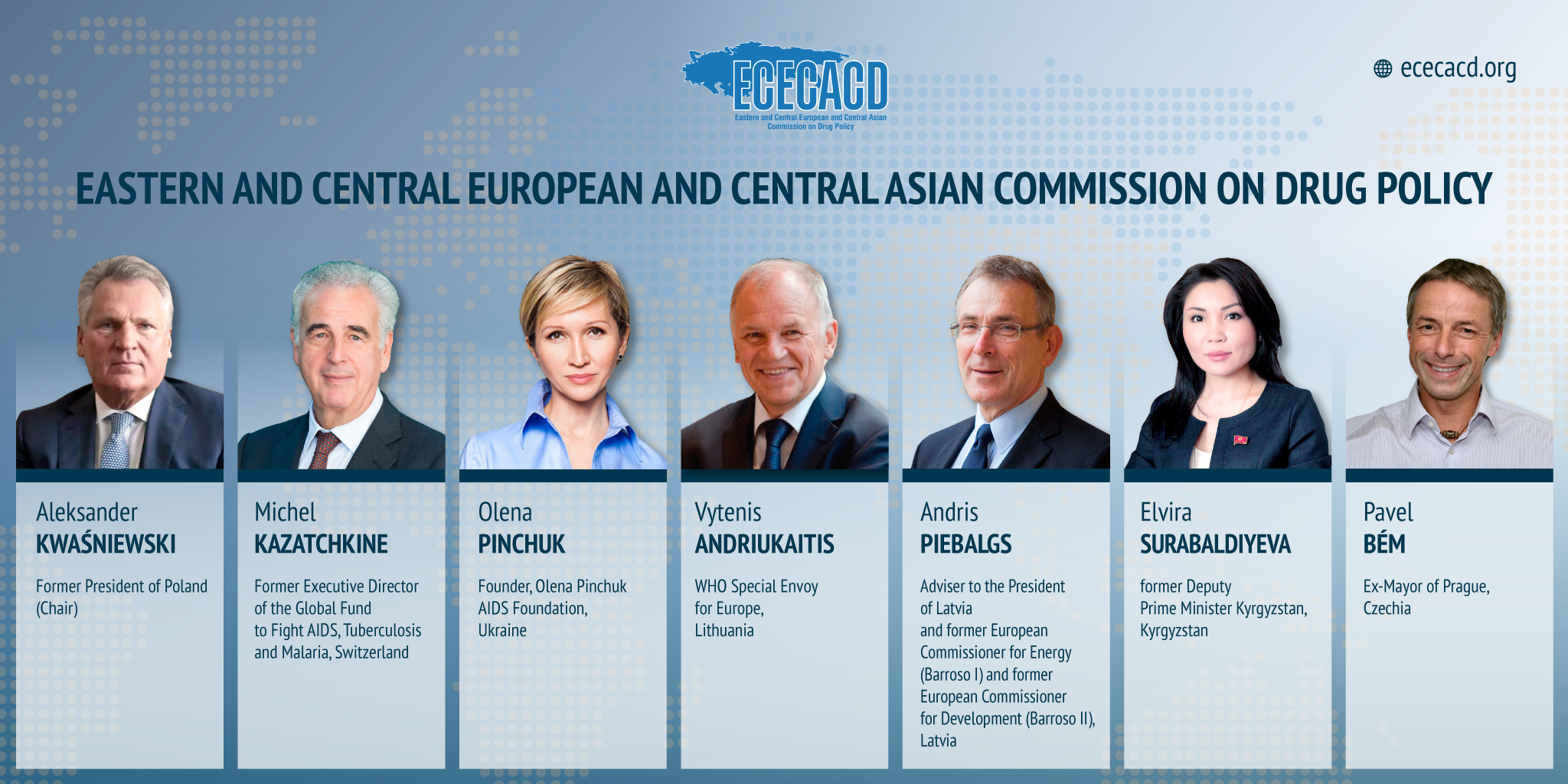 Thursday November 18, 2021, (Warsaw, Poland)— A group of distinguished personalities from the Eastern European and Central Asian region led by the Former President of Poland Aleksander Kwaśniewski,  today launched the  Eastern and Central European and Central Asian Commission on Drug Policy (ECECACD), a new independent regional body  set up to bring  evidence -based scientific data to the table  to initiate honest conversations with decision-makers in the countries of the region.

The region is home to an estimated 3 000 000 people who use drugs— one quarter of all people who inject drugs worldwide and is also one of two regions in the world where HIV infections continue to increase.

“As a member of the Global Commission on Drug policy, I am proud to see how political mobilization and commitment can, and have, changed drug policies to be more evidence-based and human rights oriented,” said President Aleksander Kwaśniewski who will also chair the new body. “That is why I am inspired to initiate a Regional Commission on Drug Policy—one that will focus on the specific epidemiology of the region.

“My fellow Commissioners and I are all joining the ECECACD to learn some more with the aim of initiating an open, evidence-based dialogue that helps to promote a more balanced and human rights approach to drug policy in the region.”

The ECECACD will feature the following Commissioners:

The first analytical reports of the Commission:

Central and Eastern European countries and Central Asian countries face prevailing problems associated with the trafficking and transit of illicit drugs from Asia and Latin America, mostly to EU member states, as well as with drug use of locally produced synthetic opioids and new psychoactive substances.

Approximately half of all new HIV infections occur among people injecting drugs (PWID). One in seven PWID is living with HIV and one in three is infected with hepatitis C.

The Central and Eastern European countries and Central Asian countries face prevailing problems associated with traffic and transit of illicit drugs from Asia and Latin America mostly to EU member states, as well as with the use of locally produced synthetic opioids and new psychoactive substances.

Across the region, drug policy is primarily focused on the reduction of drug supply and demand, through law enforcement programs that aim to end illicit drug markets and stop consumption. Repressive and punitive polices are applied to people who use drugs, imposing severe criminal sanctions.

This imbalance between repression and care is reflected in the region’s legislation, and has led to a range of negative consequences: growing HIV, hepatitis and tuberculosis epidemics, widespread corruption in law enforcement agencies, economic waste, etc.

The region is one of two in the world where HIV infections continue to increase. Approximately half of all new HIV infections occur in people injecting drugs (PWID). One in seven PWID is living with HIV and one in three is infected with hepatitis C.

The criminalization of drugs and drug use is the main cause for an increase in prison populations in EECA countries. Arresting and putting people who inject drugs (PWID) in prison is both expensive and associated with an increase in HIV infections.

A simple shift in resources from criminalization to harm reduction approaches, would ensure economic savings and more HIV infections averted. Accordingly, to the recent research by The Economist – over a 20 year period (2020-2040) the cost savings accrued from decriminalizing can buy antiretroviral therapy (ART) and opioid agonist treatment (OAT) to control the current HIV epidemics in people who inject drugs (PWID) in Belarus, Kazakhstan, Kyrgyzstan and Russia.

Reinvesting saved costs (that is €773m over 20 years) into scaling up antiretroviral therapy (ART) to 81% coverage and opioid agonist treatment (OAT) up to 40% coverage as per UNAIDS/WHO guidelines—would ensure a decrease in HIV incidence in PWID by 79.4-92.9% over 20 years.

That is something governments cannot ignore!

According to the data, collected through the REAct (instrument for the community-led monitoring of most marginalized groups’ human rights violations), one out of every three cases of such violations registered in EECA region involves police and law enforcement agencies severely violating fundamental human rights such as the right to life, freedom, and bodily integrity.

Moreover, every third detained drug user experiences torture or other cruel, inhuman or degrading treatment during arrest or detention. In order to make detainee collaborate in the investigation or to obtain confessions, police officers impede access to opioid-substitution therapy, causing unbearable suffering and abstinence syndrome to detained drug user.

In contrast to what we see in the region, many countries around the world have moved, or are moving away from  the “war on drugs” approach in  one  form or the other: Jamaica, Switzerland, Germany, Portugal, Uruguay, Canada, and Mexico are good examples.. These countries have acknowledged the failures of prohibition and therefore adopted new approaches to address the drugs issue through policies that protect human rights and address the drug-related harms more efficiently.

Within the ECECA region, Czechia, for instance, has one of the lowest rates of HIV infection among PWID (<1%), of overdoses (20 cases per year), and  low hepatitis infection rates. They have one of the smallest heroin markets in Europe, and people who use drugs are in contact with services.