On December 1-2, the Executive Director of the Alliance for Public Health paid an official visit to Ireland 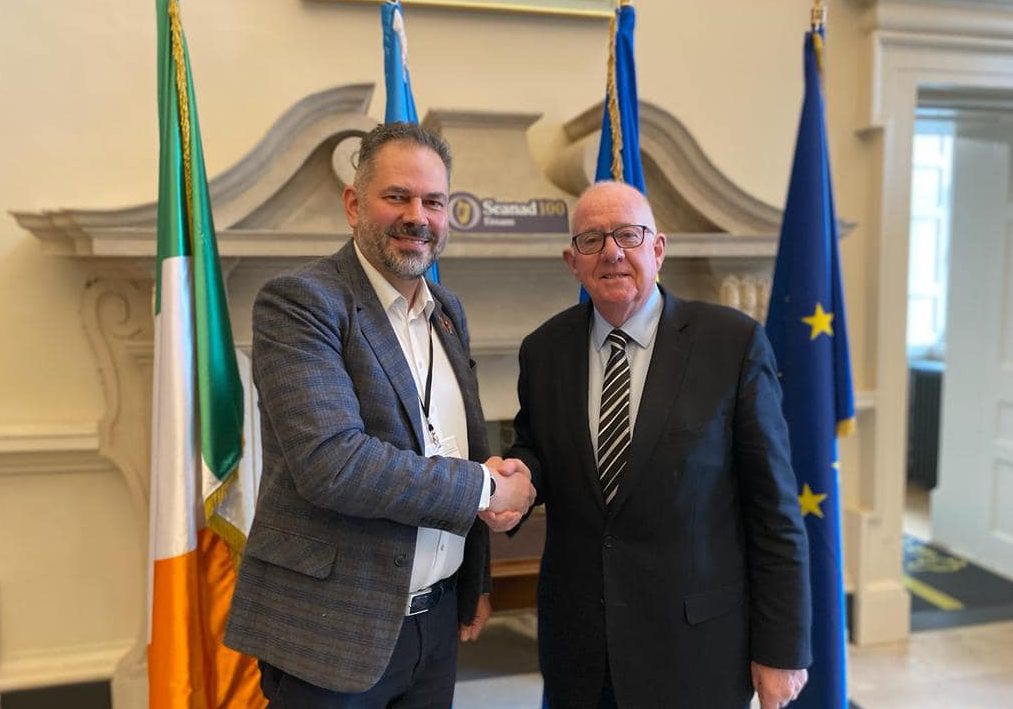 On the International AIDS Day, Dr. Andrey Klepikov, Executive Director of the Alliance for Public Health, paid an official visit to Ireland to share his experience in the HIV/AIDS response.

The program of the visit, which lasted on December 1-2, 2022, included a series of meetings and speeches, where Dr. Klepikov spoke about the unbreakable struggle of Ukrainians against Russia’s terrorist aggression in Ukraine, the huge losses of medical infrastructure, innovations and changes in approaches to the work of the Alliance’s team since the beginning of the large-scale war in Ukraine, which the Alliance team has made.

The program of the official visit to Ireland started with a meeting at the Embassy of Ukraine in Ireland.

At the meeting with Mrs. Larysa Gerasko, Ambassador of Ukraine to Ireland, the difficulties faced by Ukrainians in Ireland in accessing medical services and receiving treatment were discussed.

Andriy Klepikov told the Ambassador about the work of the international hub HelpNow, which helps Ukrainians to access HIV treatment by coordinating requests from Ukrainian patients in more than 35 countries. In Ireland, the hub works with the local organization HIV Ireland (https://www.hivireland.ie). During the entire period of the hub’s work, one third of all requests for treatment in Ireland came from Dublin.

The meeting also discussed ways to strengthen the information field and focuses for the most effective broadcasting of information on the situation on the public health front, as well as reputable media and possible channels for the organization to raise additional funds.

It should be noted that the Alliance for Public Health, with the support of more than 100 non-governmental organizations from around the world, initiated and organized the emergency launch of the international coordination hub HelpNow. The hub began its work on March 1, 2022 in response to the crisis, which was facilitated by Russia’s large-scale invasion of Ukraine.

The official website of the hub with a list of all services is https://helpnow.aph.org.ua. So far, 13,000 cases have been supported with treatment and/or other critical services at the new location. Andriy Klepikov, Charles Flanagan, the Chairman of the Committee and Senators Gerard Crowell, Joe O’Reilly discussed the pressing issues for Ukrainians today, in the context of the impact of the full-scale Russian invasion on people living with chronic diseases and fighting for their lives every day. Migration issues, humanitarian problems, problems in access to support and treatment services, as well as the consequences that the whole world is already seeing in the de-occupied territories were discussed separately.

Separately, the issue of the cold season and ways to help, to provide support to Ukrainians who need it in humanitarian, medical and consulting contexts were raised.

Mr. Charles Flanagan expressed his admiration for the courage of Ukrainian civil society, and stressed that the meetings and information presented by Andriy Klepikov help to keep the topic of support for Ukraine “at the top of the agenda”. Lecture for students on the resilience of Ukrainians

Also, the Executive Director of Alliance for Public Health gave a lecture for students of Trinity College Dublin.

At the lecture, Andriy Klepikov spoke about the war in Ukraine, its impact on the work of NGOs and the challenges they heroically overcome to help people living with chronic diseases.

Students were also presented with the general situation on HIV detection and treatment, as well as the work of the international hub HelpNow, which helps Ukrainians with access to HIV treatment, coordinating requests from Ukrainian patients in more than 35 countries.

Alliance for Public Health expresses its sincere gratitude to partners Irish Aid and Global Health Network for organizing the official visit, and to thank everyone for their interest in the problems in Ukraine due to the full-scale invasion of Russia and the constant support of Ukrainians around the world.