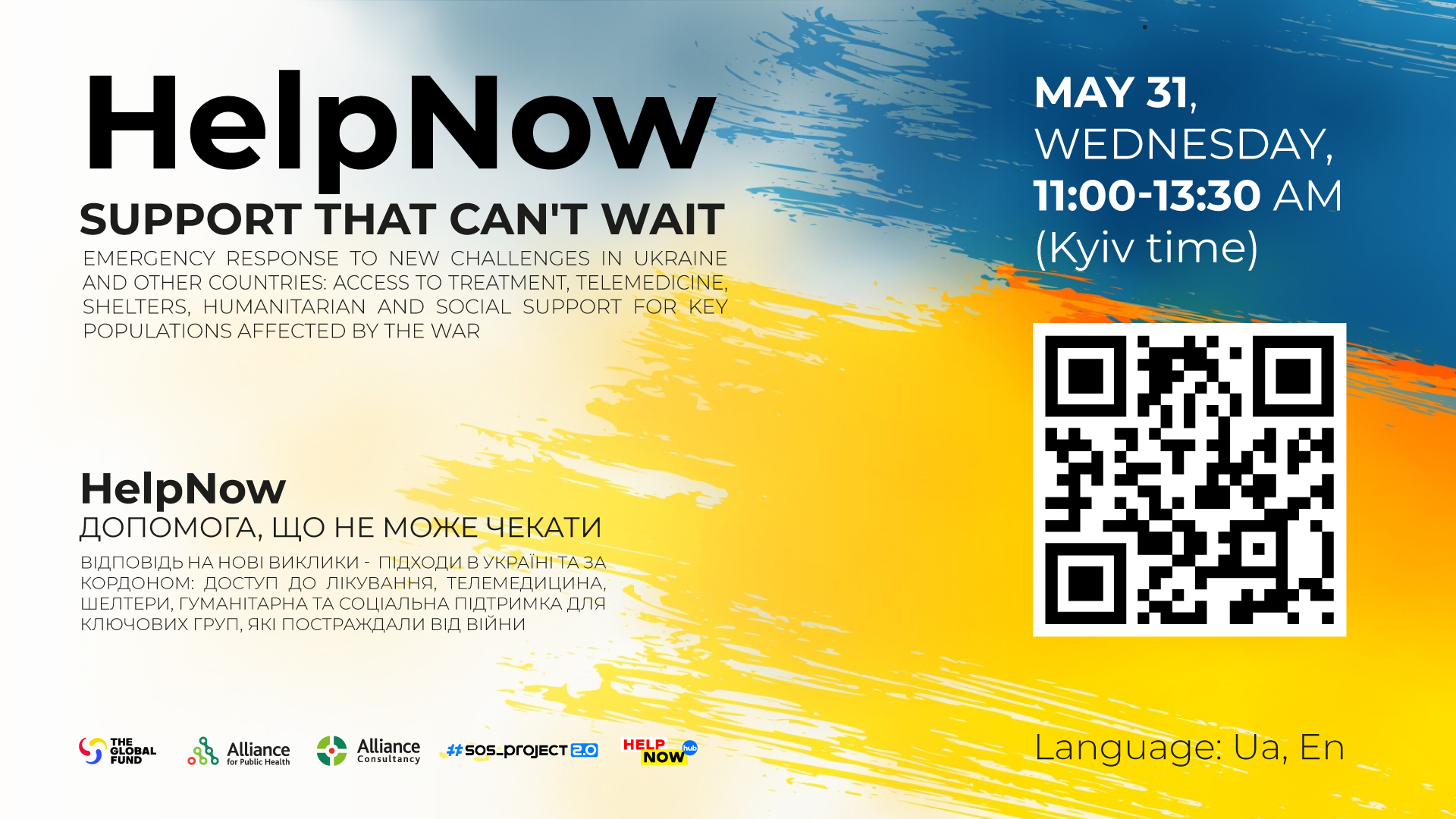 On May 31, 2022 at 11:00 a.m. Kyiv time (GTM+3) there will be a webinar “HelpNow – Support that Can’t Wait! Emergency response to new challenges in Ukraine and other countries: access to treatment, telemedicine, shelters, humanitarian and social support for key populations affected by the war.”

Language of the event: Ukrainian, English. On February 24, 2022, Russia launched a devastating attack on Ukraine. In the first weeks, more than five million refugees from Ukraine crossed borders into neighboring countries, and many more have been forced to move inside the country. Refugees and internally displaced people, including those  from HIV key affected populations are especially vulnerable due to the threat of losing access to services and treatment.

According to the United Nations (UN), as of May 16, more than 14 million people are believed to have fled their homes in Ukraine since the war began, including internally displaced people and refugees. More than six million have left for neighboring countries, and eight million people are thought to be displaced inside the war-torn country itself.

Non-government organizations from Ukraine, as well as regional and international organizations, national community based organizations from host countries, together with Ukrainian public institutions, have organized emergency services to help Ukrainians access treatments in Ukraine and around the world.

During these 3 months of war a lot has been done to support Ukrainian refugees from among key populations. Different countries and communities have been practicing different approaches with the same goal: provide crucial support and help to those in need, to Ukrainian refugees from among key populations and people living with HIV who were forced to leave their homes.

Within the frames of this event, we would like to discuss and sum up on what has been done already in regards to supporting Ukrainian refugees from among key populations, to compare the approaches of the countries, best practices and/or success stories, as well as the current gaps and the ways to overcome the barriers.

On the EECA regional level, APH SoS_Project 2.0, together with partners, has been providing case management support for HIV, TB and OAT patients who are relocating to other regions within Ukraine and to other countries. The unique assistance service named “HelpNow” was created within the first week of the war and began its work on March 01, 2022. This service provides information that helps Ukrainians to get access to ART, OAT, anti-tuberculosis drugs, drugs for viral hepatitis and mental assistance within Ukraine, as well as abroad. The HelpNow Team and partners practice the most patient-oriented approach in order to comprehensively meet the needs of clients. As of now more than 1000 requests from refugees or relocated people have already been coordinated by #HelpNow and this number grows every day.

In April 2022, Alliance for Public Health together with Alliance Consultancy have launched the project “Response to the emergency situation in connection with the war in order to support internally displaced persons within Ukraine and Ukrainian refugees abroad – representatives of key populations (PLHIV, IDUs, SW, MSM, etc.)” to support the continued provision of services to Ukrainian refugees from key populations moving to other countries. The project plans to respond quickly to emergencies to provide as much technical support as possible in the countries where Ukrainian refugees have moved over the last 3 months to meet the most critical needs of refugees belonging to key populations in terms of HIV / AIDS.  Within the framework of the project the temporary “Ukrainian HIV Support Navigation Hub” – “HelpNow HUB”  was established*.