Mayors, vice-mayors of the EECA and Balkans region: aggravation of the situation with human rights violations, the fight against HIV and health issues of migrants during the period of COVID-19 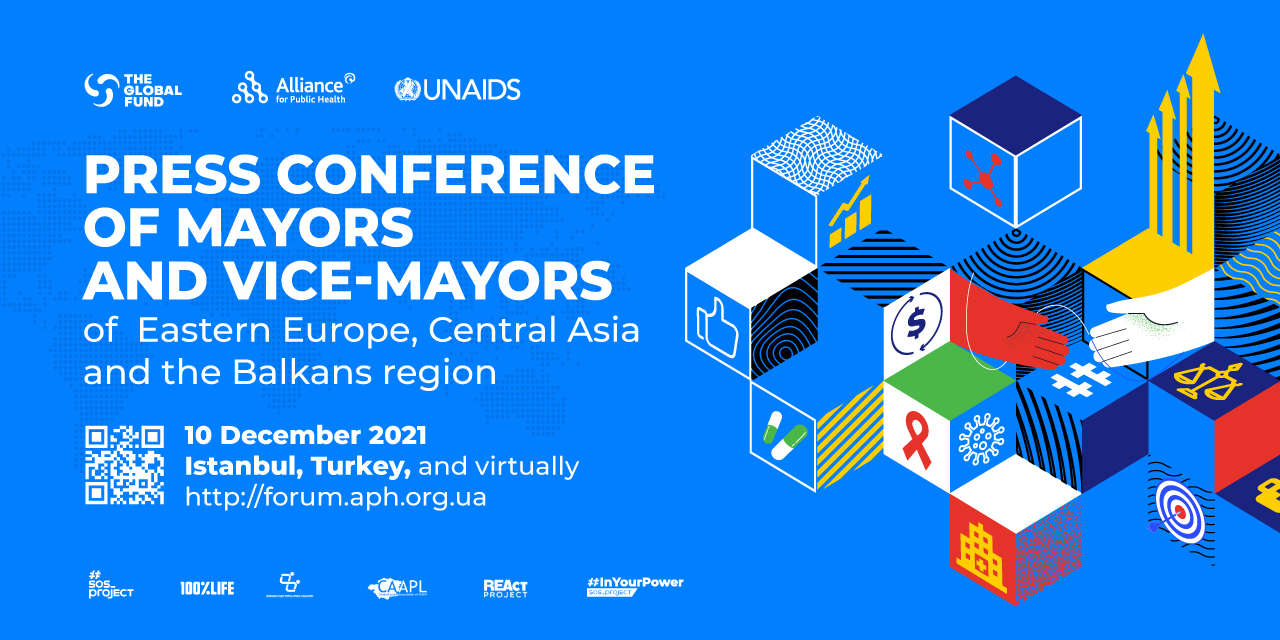 vice-mayors, heads of municipal health departments of Kyiv and Odesa (Ukraine) , Chisinau (Moldova), Osh (Kyrgyzstan), Kragujevac (Serbia), Prague (Czech Republic), as well as the leaders of the international charitable foundation, ITPCru and the newly created Commission on Drug Policy ECECACD, will talk about the components of sustainable health care in countries and cities, violation of human rights in the context of HIV and health issues of migrants during the period of COVID-19, as well as answer journalists’ questions live.

The press conference will take place as part of the HEALTH SUSTAINABILITY FORUM: HIV and COVID-19 in the EECA region.

Where: The press conference will be held in Istanbul, Turkey, at the Hilton Bomonti Hotel, and virtually at https://forum.aph.org.ua/en/.

Translation into Russian and English will be provided.

The broadcast of the press conference will be open to everyone on the website https://forum.aph.org.ua/en/.

Accreditation for journalists for online and offline participation at the link: https://cutt.ly/KYzd4mx.Through the accreditation form on the forum, you can send your questions to the speakers of the press conference in advance. In this case, the questions will be raised by the host on behalf of the editorial office and your media will get an exclusive comment. The time of the press conference is limited, so not all questions of the live broadcast can be asked to the speakers.

Additional Information for the countries of Eastern Europe, Central Asia (EECA) and the Balkan region:

The COVID-19 pandemic has worsened the human rights situation in 7 EECA countries: for 2020-2021 the REAct system has registered 6,000+ cases of rights violations, stigma and discrimination. The collected evidences point to legal barriers, harassment and criminalization of HIV-vulnerable populations. It makes it difficult or even impossible for them to access health services, prevention and treatment of HIV, tuberculosis and other diseases.

The awareness campaign, based on evidence collected through REAct as well as the 30 articles of the Universal Declaration of Human Rights, illustrates that the rights of marginalized populations most vulnerable to HIV and tuberculosis continue to be violated in practice. Analytical reports have been published on the website https://react-aph.org/en/, which reflect the main trends and nature of offenses, as well as offer specific recommendations to improve the situation in each country.

According to REAct data, the main violators of rights in 7 countries are representatives of state institutions – medical workers, police. The most common offenses are discrimination, misconduct, violence by law enforcement agencies, denial of access to health services, disclosure of health data and stigma by health workers, physical violence against women by sex partners as well as relatives and police officers.

The EECA region is the only region in the world where the number of new HIV infections continues to rise among all age groups. According to UNAIDS, there are 1.6 million people, living with HIV in the countries of the region, only 53% of whom are receiving ARV therapy.

Since the beginning of the epidemic, 79.3 million people worldwide have been infected with HIV and 36.3 million have died from AIDS-related illnesses. Today in the world about 37.7 million people, living with HIV, and almost 6 million of them do not know that they are infected. About 28.2 million people, living with HIV are receiving antiretroviral therapy. In case of insufficient action, UNAIDS has warned of the risk of 7.7 million AIDS-related deaths over the next 10 years.

The total number of cases in the world exceeded 266.5 million people, active cases at the moment – 21.2 million.

Within the global AIDS response, migrants are often identified as a “key population” for HIV prevention activities. Although migration does not equal HIV vulnerability, they face increased risk of HIV infection during after migration due to multiple legal, social, and economic barriers they face on the route and in the receiving countries.

HIV positive migrants often persist in a state of legal uncertainty. Many seek and some obtain medical care, but the arrangements are often not stable. As a result, migrants living with HIV often remain silent and submissive, and socially excluded; they face multiple barriers to attaining health services, especially in the countries of Central and specifically Eastern Europe.

Efforts must be made to reduce barriers to health services, for the benefit of migrants and their communities, and cities being the magnets of migration play a crucial role in addressing the health needs of mobile populations.

The Central and Eastern Europe and Central Asia (CEECA) countries face widespread problems related to the illicit trafficking and transit of illicit drugs from Asia and Latin America, mainly to EU Member States, as well as the consumption of locally produced synthetic opioids and new psychoactive substances.

People who inject drugs (PWID) in the region account for about half of all new HIV infections. Every seventh one lives with HIV, and every third is infected with hepatitis C.

A simple transition from criminalization to resource-based harm reduction approaches will generate cost savings and prevent more HIV infections. Over a 20-year period (2020-2040), according to a recent study by The Economist, savings from decriminalization could afford buying antiretroviral therapy (ART) and opioid agonist therapy (OAT) to control the current HIV epidemic among PWID in Belarus, Kazakhstan, Kyrgyzstan and Russia.