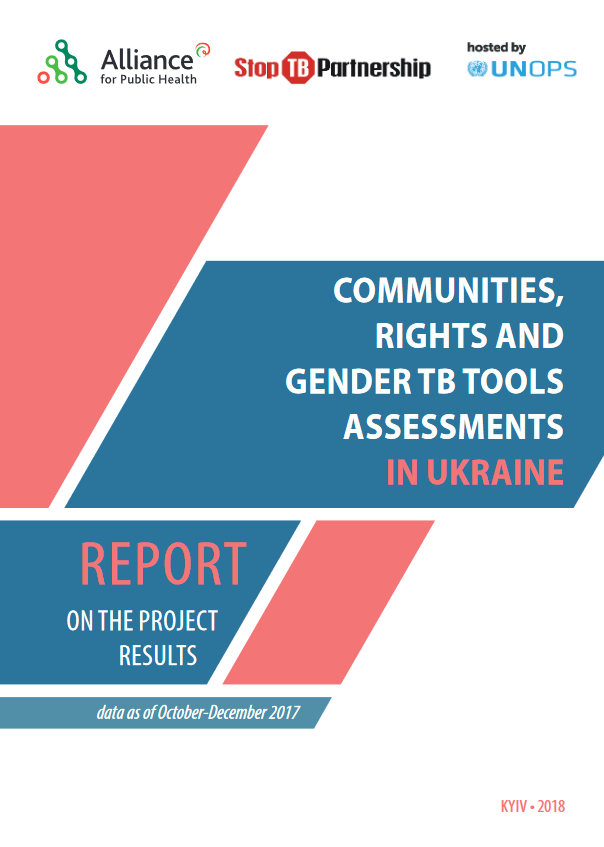 Alliance presented the final report on the results of the project “Communities, Rights, and Gender TB Tools Assessment”, implemented in Ukraine with the support of the Stop TB Partnership. The project was implemented in partnership with the Ukrainian Institute of Public Health Policy in coordination with the Center for Public Health of the Ministry of Health of Ukraine and close cooperation with key communities and activists in the field of TB in Ukraine. The report is based on data as of October-December 2017.
Within the framework of the project, a unique research for our country was held, engaging a wide range of stakeholders as its distinctive feature. This study was based on such tools as Gender Assessment Tool for National HIV and TB Responses (Stop TB Partnership, UNAIDS) and Action Framework for TB Key Populations (STOP TB Partnership). The study findings provide useful information for strengthening the national response to the TB and TB/HIV epidemic in Ukraine.
The gender-based approach to the evaluation of the TB program has helped to identify barriers in order to develop appropriate interventions, taking into account certain risks for men and women, boys and girls, as well as people with other gender identities within the framework of TB control and care programs, since gender determines certain aspects of health seeking behavior, the barriers associated with it, and the grounds to overcome them. Among the key findings of the study, based on data collected through qualitative component (two focus groups with women and men affected by TB and in-depth interviews in four regions of Ukraine with community representatives, NGOs, international organizations, government agencies and TB doctors) there have been identified the specific needs of women, men and transgender people in the diagnostics and treatment of TB. Taking into account the large number of gender-specific needs of patients, the outpatient treatment mode is considered to best satisfy them without a significant additional financial and organizational burden on the health care system.
The project also reflected existing approaches to key affected populations, which would ensure that high-risk population is not left behind by the health system. The carefully selected factors that influence the risk of disease in different key populations enabled compiling an exhaustive list of such groups. This approach on prioritization of the high risks groups for TB disease is proposed for implementation at the annual basis at national and regional levels. It can also be used by non-governmental organizations as a powerful advocacy resource.
The link to download the assessment report in Ukrainian and English.