Every ninth prisoner in Ukraine serves a sentence for drug possession. 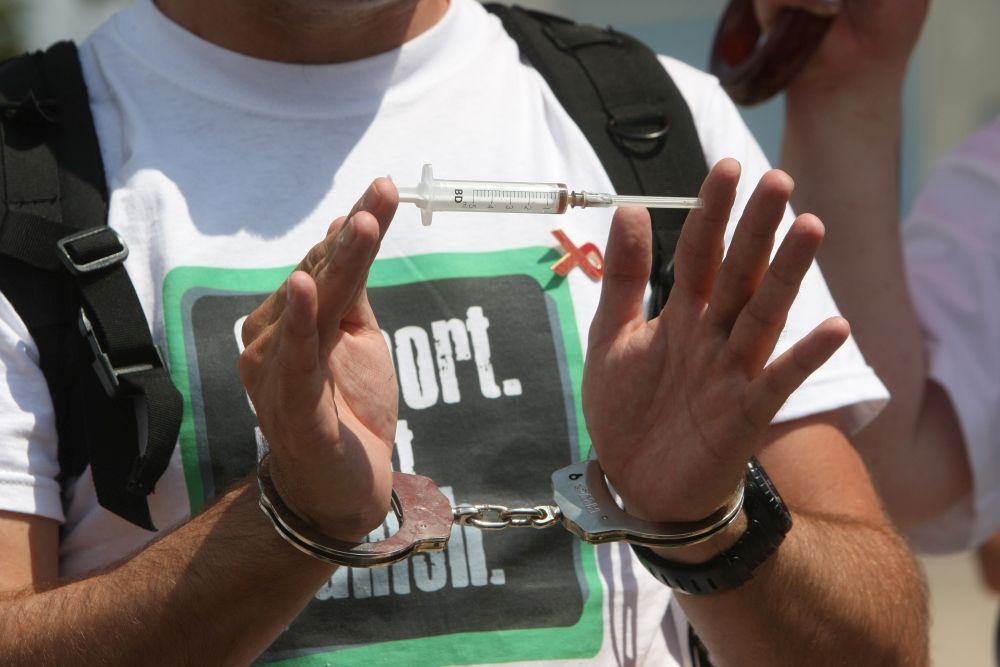 Every 11th convicted person in Ukraine punished for the violations, which in most democratic countries are not considered to be criminal offences!

Today Ukraine, along with 90 other countries of the world, traditionally joins the global Support. Don’t Punish campaign calling for humane drug policies!

Alliance for Public Health first initiated this campaign in Ukraine back in 2013, and today we keep up the tradition to draw the attention of decision-makers, national media and all responsible citizens to the inadequate repressive state policies affecting hundreds of thousands of drug-dependent Ukrainians. As the recent expert estimates show, in the government-controlled territories of Ukraine there are about 317,000 people who inject drugs, most of whom have chronic drug dependence. Only 13,000 (4%) of those people have access to free treatment in government-supported opioid substitution treatment programs, which allows them to break the vicious criminal circle related to their daily need to get illegal drugs.

Today: every ninth prisoner in Ukraine serves a sentence for drug possession.

Every year, about 10,000 people in Ukraine are convicted for drug-related crimes (in 2019 – 9,600 people). In the recent three years, there has been a stable trend: at least 83% of people convicted for drug-related crimes serve their sentences for illegal drug possession without intent to sell (art. 309 of the Criminal Code of Ukraine). In 2019, 8,000 people were convicted for such crimes, i.e. every 9th of 70.3 thousand people convicted in Ukraine. However, many people do not know that every 11th person convicted for such crimes in Ukraine (in 2019 – 6.2 thousand) serves a sentence for the acts, which are not even considered criminal offences in most civilized democratic countries (Criminal Code of Ukraine, art. 309, part 1) because the “threshold amounts” of most widely used illegal drugs approved with the Order of the Ministry of Health of Ukraine No. 188 (2000) are 200-600 times lower (!) than in the countries of the European Union, which Ukraine has been trying to become part of for so many years! Even such unfriendly and undemocratic country as Russia has in 100 times (!) less repressive “threshold mounts” for most widespread drugs.

Tomorrow: 30-time increase of the fines for drugs possession!

Our government decided to “decriminalize” or rather “depenalize” drug-dependent citizens starting from 1 July 2020, but in a very particular way!

Considering the lack of proper access of drug users to treatment and rehabilitation and realizing that people with chronic illness depend on illegal psychoactive substances every day, it may seem that in such a way the government decided to “earn some money”, i.e. fill the national budget with the growing proceeds from the boosted fines “imposed” on over 300,000 of drug dependent people in Ukraine. Of course, if every one of those people pays the maximum fine at least once a year, the state can earn about 15 billion UAH!  However, both experts and family members of drug users understand that this is not how it works. Those people have long ago taken all the money from their homes to pay drug dealers and to bribe corrupted police officers. Indeed, today “drug corruption” is one of the most developed illicit enrichment schemes for numerous organized groups of “turncoats”, who recently have been regularly exposed by the State Bureau of Investigations, the Prosecutor General’s Office, the Security Service of Ukraine and the National Police. On the one hand, corrupted law enforcers traditionally “protect” organized drug business, on the other hand – they set up ordinary drug users using their own criminal schemes to extort money from them or their relatives for avoiding criminal responsibility. What will such “characters” do after there is a 30-time increase in the official “fines”?! Unfortunately, that is a rhetorical question! It is indirectly confirmed by the stable annual decrease in the number of convicted drug dealers with an increase in the number of drug users convicted for drug possession (see the diagram above).

Meanwhile, despite all the statements of the progressive Minister of Justice, Ukrainian prisons will continue to serve as the “training center” of organized crime and an incubator of infectious diseases because the usual prisoners are ordinary drug-dependent people, who have not been given any other options by the state apart from punishment! Decriminalization of drug users is inevitable… in a democratic state!

Last week, there was a meeting of the new members of the Inter-ministerial Working Group to Revise Legislation on Narcotic Drugs under the Ministry of Health of Ukraine. One of the unanimous resolutions was the decision to revise the “threshold amounts of drugs” (Order of the Ministry of Health N 188/2000), which is now the key reason of the inadequately high level of artificial criminalization of drug users in Ukraine. However, we need to keep in mind that in the past such intentions were declared and even started to be implemented as draft regulations on numerous occasions. But without the decision-makers clearly understanding the existing situation and without the political will of high-level officials, Ukraine will not break this “vicious circle” and the number of issues related to drug use will only be growing.

The global Support. Don’t Punish campaign is called to draw public attention to such challenges and demonstrate the serious harms caused by the senseless “War on Drugs”. The campaign calls to implement drug policies, which are based on human rights, protect health and reduce the risks related to drug use.